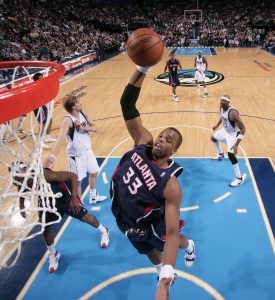 Williams was drafted by the Atlanta Hawks with the fifth overall pick in the 2006 NBA Draft. Over his six-year NBA career, he saw action with the Hawks, Sacramento Kings, Minnesota Timberwolves, Boston Celtics, Denver Nuggets, New York Knicks and New Jersey Nets. In 361 regular season contests (104 starts), Shelden averaged 4.5 points and 4.3 rebounds in 15.5 minutes of play. Additionally, he suited up for Élan Chalon of the LNB Pro A and the Tianjin Ronggang of the Chinese Basketball Association. Prior to his professional playing career, he was a four-year member of the Duke University men’s basketball team (2002-06). He is currently the all-time leader in Blue Devils history in total rebounds (1,262), offensive rebounds (447) and blocks (422). Williams was named the National Defensive Player of the Year twice throughout his collegiate career (2005, 2006). His No. 23 jersey was retired by Duke University on January 28, 2007 and he was inducted into the Duke Hall of Fame in September 2018.

A native of Oklahoma City, OK, Shelden has one daughter, Lailaa.