Named head coach of the Erie BayHawks on July 19, 2018, Noel Gillespie enters his first season with the College Park Skyhawks and is the franchise’s first-ever head coach. Noel brings 17 years of professional basketball experience to the Skyhawks.

Prior to the 2018-19 season, he was the inaugural head coach of the Greensboro Swarm, NBA G league affiliate of the Charlotte Hornets, for 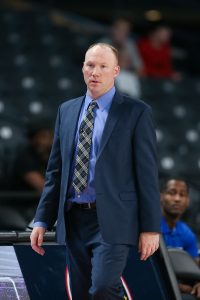 Prior to the start of the 2010-11 campaign, Noel was promoted to a full-time assistant coach. In 2007, while with the Suns, he was named an assistant coach for the Western Conference All-Star Team and the sophomore team at the Rookie Challenge during All-Star Weekend in Las Vegas.

A native of Milwaukee, WI, Noel began his NBA career in 2001-02, serving as a video assistant for the Indiana Pacers. He then spent the 2002-03 season as a graduate assistant for men’s and women’s basketball at Florida State University. Noel is a graduate of University Wisconsin-Whitewater, earning a degree in electronic media communications with a minor in coaching. He and his wife, Sherry, have two children, Jack and Rowen