Mfon Udofia joined the Skyhawks after spending last season with the Erie BayHawks. Prior to Erie, he was an Assistant Coach for the Delaware Blue Coats for two seasons. 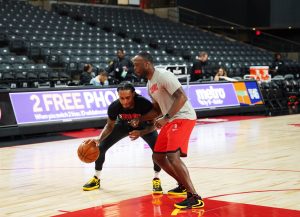 He brings three years of NBA G League playing experience to College Park, having played for the Delaware 87ers (2013-14) and Austin Spurs (2014-16). He was an Assistant Coach for the Nigerian National Team during the 2019 FIBA World Cup, where Nigeria qualified for the 2020 Summer Olympics. In 2015-16, he played overseas for Siarka Tanobrzeg of Poland.

An Atlanta, GA, native and Georgia Tech University graduate, Mfon was a member of the Yellow Jackets men’s basketball team for four years (2009-13) and was on the Miller Grove High School (Stonecrest, GA) team that won its first state championship in 2009.