ATLANTA – The Atlanta Hawks today revealed new uniforms, inspired by the franchise’s signature colors and marks synonymous with the team and its history in the city of Atlanta since 1968. In addition to the uniforms, the team also released new primary and secondary logos along with new ‘Atlanta Hawks’ wordmarks. The team will begin wearing these uniforms to start the 2020-21 season. See the full collection at hawks.com/forever. 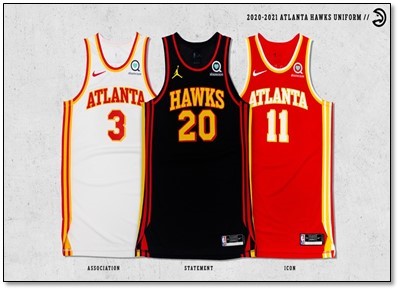 Infinity Black and Legacy Yellow rejoin Torch Red and Granite Gray to create a visual identity derived from the Hawks proud heritage. These core colors have been present throughout the Hawks’ time in Atlanta, having adorned more than five decades of Hawks Basketball including Hawks Legends Lou Hudson, Pete Maravich, Dikembe Mutombo and Dominique Wilkins.

“Now more than ever, it’s important for Atlantans to come together. We know sports has the power to unify and for years, true Hawks fans have shared their passion for our classic colorways. With the guidance of our ownership team and the talents of our brand creative and merchandising teams led by Shirley Zhang and Amy Serino working alongside our Nike design partners, we have found a sweet spot of classic and modern for the future of the franchise. This new look will stand the test of time and exemplifies our brand mantra, forever True to Atlanta,” said Melissa Proctor, Atlanta Hawks & State Farm Arena Chief Marketing Officer.

Each color symbolizes integral components of the Hawks franchise and its commitment to the state of Georgia and city of Atlanta:

TORCH RED: Red is a consistent thread throughout Atlanta Hawks teams from our beginning in 1968. This primary color symbolizes the heart of our unending quest for excellence, our red-hot spirit and fiery passion for the game.

INFINITY BLACK: Affirms the Atlanta Hawks’ bold and relentless pursuit of a championship, fueled by the support of our unwavering fans and a love for our city that will never die.

LEGACY YELLOW: This signature color is an homage to the golden era of Hawks basketball.  A hue that shines brightly, reminding us of the shoulders on which we stand.

GRANITE GRAY: Signifies our firm foundation comprised of deep character, class, strength and integrity. Dedicated to supporting each other and our community.

“Torch Red, Legacy Yellow and Infinity Black have been staples of the Hawks since arriving in Atlanta in 1968. With our new uniforms, we wanted to usher in a new golden era of Hawks Basketball while embracing the rich history and legacy of basketball in our great city,” said Atlanta Hawks & State Farm Arena CEO Steve Koonin.

The Statement edition pops with an Infinity Black base and Hawks stitched across the chest in Legacy Yellow with a Torch Red outline. Legacy Yellow fills the letters, numbers and marks with a subtle Torch Red outline. Torch Red and Legacy Yellow alternate along the sides of the jersey and shorts, intersecting with the Evo primary icon logo on both sides of the shorts. The waistband sports the new ‘A-T-L’ secondary logo.  The Sharecare jersey patch is placed just above the heart on all three versions of the new Hawks uniform. Jordan Brand’s Jumpman logo, located at the right jersey strap is a daring addition to the kit symbolizing the legend’s approach to the game and will appear on all NBA Statement Edition uniforms beginning with the 2020-21 season.

Both the Association and Icon editions have Atlanta emblazoned across the chest with the Swoosh logo below the strap on the right side and directly across from the Sharecare patch. White makes up the primary color of the Association uniform with Torch Red filling the numbers, letters and marks and Legacy Yellow borders. Along the sides, red and yellow stripes alternate and run the length of the jersey. Torch Red is the primary color of the Icon edition with white filling the numbers, letters and marks with Legacy Yellow borders and alternating stripes on the sides. The shorts of both uniforms feature the iconic Evo logo on both legs with the club’s new secondary ‘Hawks’ wordmark appearing at the mid-section of the waistband.

Since 2017, the Atlanta Hawks have held a multiyear partnership with Sharecare, the Atlanta-based digital health company that helps people manage all their health in one place. Through this partnership, Sharecare serves as both the team’s inaugural jersey patch sponsor and its partner in the Sharecare Movement – a community-driven initiative launched by both organizations to make Georgia one of the healthiest states and Atlanta one of the healthiest cities in the country.

Fans can go to hawksshop.com to sign up for early access info on the new Hawks jersey preorder and other swag.